Say "Hello!" to The Boss Lady

Six Years - 6 Years - six annees -seis anos - sest godina (thats croatian for my friend Emily).  Thats how long my quest lasted.  The quest that brought me to The Boss Lady. My very own gleaming silver, 27 ft. of stunning vintage. 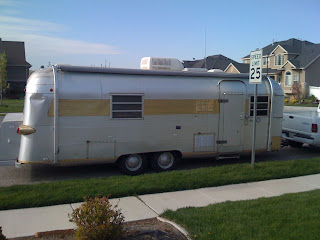 She may not appear to be gleaming, and yes, she has a few little bumps and dents, but give her a break - she was built in 1970!  She's older than me and in trailer years she's a senior citizen.
My quest included a bit of trailer stalking - mostly on the internet at first, but most of them were in far away lands - like Iowa and North Carolina. Getting a vintage from one of these remote locales would require lots of cash and prayers, not to mention nothing but hope that it was actually in the condition it appeared on Ebay. Hmmm...a scary proposition. Mr. Vintage Trailer was afraid one day I was going to crack and buy one of the beauties on Ebay, so he joined in my quest on the local level. It was actually Mr. Vintage that found her tucked away on an obscure side street in our little home town. Trouble was, she wasn't actually for sale... not a problem for the Vintage Trailer Lady as I am a seasoned Trailer Stalker. So with embarrassed hooligans in tow, I marched right up to the door of the little house and asked who the owner was. 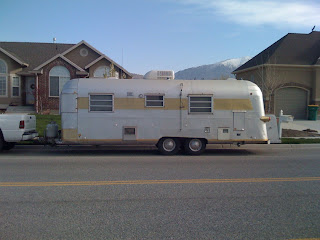 Turns out The Boss Lady was just visiting for a few minor plumbing improvements, but I was able to get the name and phone number of the current owner. That's when the true stalking began. I called that number at least 100 times with no luck. I learned later that these nice gentlemen were big fans of fishing and golfing and not so interested in answering their cell phones...and for that matter no clue how to get their messages. Finally one day a nice lady answered the phone!  She probably wondered who the loony was that kept calling. I left a good old fashioned paper message and within a couple of hours, I had the man on the phone. He was a bit surprised and had to check with his brother...so after a few phone calls and some high pressure cost negotiations at last we reached an agreement. Soon she would be mine.
A few days later, Mr.& Mrs. Vintage Trailer and the Hooligans met the kind fishermen at the trailer locale and brought the bag of cash. Sounds rather clandestine doesn't it? With one look inside this beautiful tin can, I was taken - and Mr. Vintage agreed.  Mine at last!  A bonafide 1970 Silver Streak Atlas. No, she's not an Airstream, she is a much more rare and less known cousin and...she's perfect in every way. 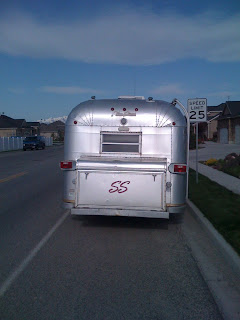 Next time I'll show you the inside - for now just bask in her lovely exterior.  Mon Chere!
Postscript: For more info on Silver Streaks, check out the Vintage Trailer Resources page.
Posted by Stephanie at 8:56 AM 4 comments:

My First Encounter with the REAL THING!

In spring of 2008, Mr. Vintage and I took a trip to the littlest town we love the most - Blanding, Utah. During our visit to Jick - Ms. Original Vintage,  I took the hooligans out for their first glimpse at Natural Bridges National Park.  It was on the road - at a rest stop west of civilization that I spied this gleaming, sparkly vision of vintage. 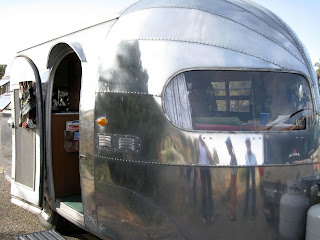 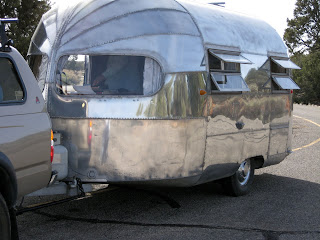 This is when the hooligans dubbed me "the trailer stalker" because I had to see it!  I had to know it's story. It called to me like a magnet - that sticks to aluminum (huh?...I don't know, just go with it).  Turns out, Vintage Trailer people LOVE to tell you their story, take you inside and show you around.  This was my first encounter with the REAL vintage.


What I beheld,and now share with you,is a circa 1930s Airstream Clipper (as near as I can tell based on the archive at VintageAirstream).


Rescued from certain death in a field in Arizona, this loving couple put her on a trailer for a restful ride to their home in Oregon, where my new friend spent six months, 10 hours a day, restoring life into this little belle. She is truly remarkable - all shined up, you can see your reflection in the surface. On the inside, she's all done up in fine Hawaiian style - complete with bobble head hula girl.


She is still the eldest of the trailers I've seen on the roads and by far, the most memorable. Pure Airstream Love...that's what it is. Gotta gitcha some!
Posted by Stephanie at 6:53 AM 1 comment:

How the Obsession Began 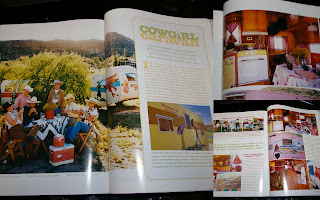 It all began with a little article in my mother-in-law's April 2002 Country Living Magazine. The article was "Cowgirl Caravan." Four pages - lots of pictures - and I would never be the same. These Cowgirls were the coolest bunch of women I'd ever seen. Each of them (only seven at the time) had the most amazing, cowboy kitschy vintage trailers my eyes had ever beheld. All decked out in vintage cowgirl. The article told of their two-week trips in the west every summer with no kids and no husband, staying in these delightful homes on wheels. They shared a sisterhood of camping, fishing and the ultimate weekend campout among friends. I fell in love and my dream was born. Someday...I'm going to be one of 'em.

Meet The Sisters on the Fly. That little group of seven has grown to almost 200 nearly 10 years later and every year a few more sisters are added. Mosey on over to http://www.sistersonthefly.com and see what it's all about. They also have a new book out that Mr. Vintage Trailer gave me - which only fueled the obsession and now armed me with a few tidbits of information on how to restore these lovely beauties. You too can find it on the sisters website for just $14.99. Well worth it - I read it cover to cover that very day and I've read it many times over. It's a great big dose of inspiration for the Vintage Trailer Lady!
Since that April day in 2002, I've kept that magazine - part of my inheritence - all these years and started my own quest to find my own vintage trailer. This blog is all about my vintage trailer obsession and adventures with family and friends as we set out to see America. Soon you'll be ready to find a little belle to make your own too. Trust me - it's fun to be a Vintage Trailer Lady.